Starting from today, I’m gonna write a series of posts on Texas Hold ‘em, one of world’s most famous forms of poker. The game is rather complicated, especially considering its origin dating back to early 20th century. In this post, I will list the bare-bones of hold ‘em. These concepts may sound boring to you if you are a veteran poker player, but I just want to make sure we’re talking in the same language — or building using the same bricks.

Texas hold ‘em uses all cards but the two jokers from one deck of poker. So there’re 13 cards wearing each of the four suits: diamonds (♦), hearts (♥), clubs (♣) and spades (♠). The exhaustive array of cards are:

Besides these full-length notations, I’ll also be using abbreviations where I denote d for diamonds, h for hearts, c for clubs and s for spades. Also, I use T to represent cards of 10. Thereby, we can easily use a two-character string, e.g. Ts, to refer to the card 10♠. This short-hand is gonna be especially useful when we try to program the game in the forthcoming posts.

There are in general three types of hold ‘em games based on the number of players at the table: 2 (called “heads-up”), 3-6 (called “6-max”) and 7-10 (this is called “full-ring”). The maximum number of players in a Texas hold ‘em game is ten, which means there’re ten players and one dealer who does not play. That makes a regular 10-player table full (well, with dealer standing). 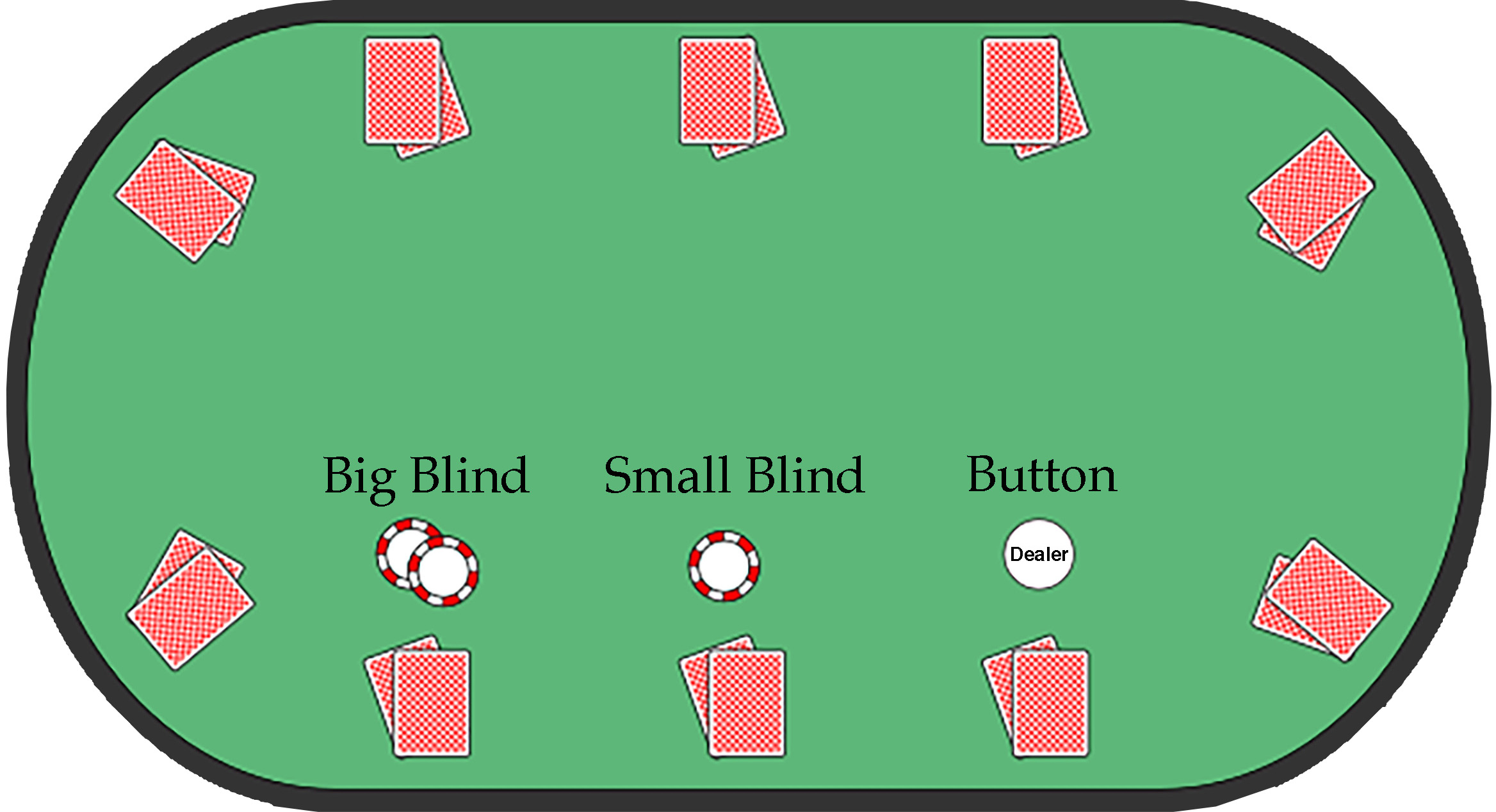 There are a variety of positions of the table (ignoring the dealer’s), but the most important are three: button (BTN), small blind (SB) and big blind (BB). In most self-dealt games where there is no specific person serving as a dealer, the button also serves as the dealer, which is why you can see the “dealer” chip at the same position. The blinds are forced contributions and are paid before the pocket cards (the two cards for each player at the beginning of the game, see figure above): SB pays first and is asked half the money of BB, then BB pays his forced bet and finally the dealer gives away all the pocket cards in a clockwise manner starting from SB. Therefore, BTN would be the last one to receive his pocket cards and also to act (bet or fold, see “betting” below).

Besides BTN, SB and BB, we also usually call the first player to the left of BB as under-the-gun (UTG), which vividly points out that he’s the first to act on this table, as SB and BB are forced to pay their bets.

There are four kinds of actions you can take each round:

Play of the Hand

The hand begins with a pre-flop betting round, beginning with UTG and continuing clockwise. A round of betting continues until every player has folded, put in all of their chips, or matched the amount put in by all other active players.

After the pre-flop betting round, assuming there remain at least two players taking part in the hand, the dealer deals a flop: three face-up community cards. The flop is followed by a second betting round. This and all subsequent betting rounds begin with the player to the dealer’s left and continue clockwise.